Delia Ann Derbyshire (5 May 1937 – 3 July 2001) was an English musician and composer of electronic music. She carried out pioneering work with the BBC Radiophonic Workshop during the 1960s, including her electronic arrangement of the theme music to the British science-fiction television series Doctor Who. She has been referred to as “the unsung heroine of British electronic music” having influenced musicians including Aphex Twin, the Chemical Brothers and Paul Hartnoll of Orbital.

James Martin Hannett was an English record producer (born 31 May 1948 – died 18 April 1991). Best known as the innovative in-house producer at Factory Records between 1978 and 1981, Hannett was personally responsible for the ‘Factory sound’ of that era. He produced nearly every band on the roster at the time: Joy Division, New Order, A Certain Ratio, Section 25, Durutti Column and OMD. Following internal financial conflicts Hannett left Factory in 1982, but would later return to produce Happy Mondays. Aside from Factory artists Hannett produced many other bands, including Buzzcocks, Magazine, U2 and John Cooper Clarke. After years of drug related problems, Hannett died in 1991 of heart failure. That same year Factory issued a compilation of Hannett’s finest production moments, since then there have been two further Hannett compilations.

The 21 tracks on this album are all compositions on reel to reel tape by either Martin or Delia which were sent to each other. 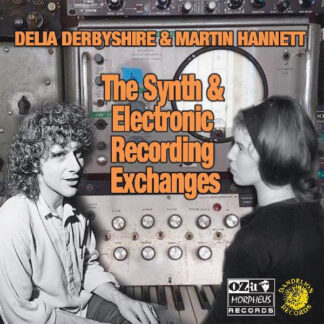 You're viewing: The Synth & Electronic recording exchanges £22.99
Add to basket