Sweep it into space

Dinosaur Jr. is an American indie rock band formed in Amherst, Massachusetts in 1983 after the breakup of the hardcore band Deep Wound of which Lou Barlow and J Mascis were members. The band was originally named Dinosaur, but immediately following the release of You’re Living All Over Me (1987), a supergroup called The Dinosaurs sued them over the use of that name, prompting the addition of ‘Jr.’ 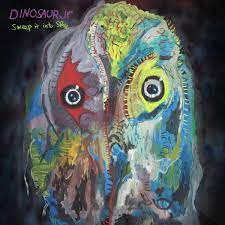