Nigel the Gannet is the true story of a gannet in New Zealand, who briefly became an international media star when he died of old age next to the concrete decoy gannet he had chosen as his mate. Though the press spun his story as a lonely one, the song celebrates Nigel’s choice of solitude over social life, suggesting that he knew the difference between being lonely and being alone all along.
• For the B side, The Burning Hell took a crack at a cover of the excellent Half Man Half Biscuit song Lark Descending, recorded outside in the woods of Eastern Canada with the help of a solar-powered recording studio trailer.
• The Burning Hell is the songwriting project of Mathias Kom, particularly known for their literate—often literary—and humorous lyrics. Theirs is a diverse yet distinctive brand of DIY Indie Pop.
• Over a varied musical career, The Burning Hell have often remained idiosyncratic and unclassifiable, much to the delight of those who love them. Although musical style and influence differs from record to record, and song to song, the constant has always remained Kom’s singular outlook on the world: wise and naive, cynical and life-affirming, full of brilliant, unexpected narratives and a deeply felt generosity of spirit. The band’s live performances underscore these themes: they exhibit a joy and camaraderie too infrequently seen on stage. Indeed, the essence of the band is inclusive and celebratory; whether on stage or on record, there’s something for everyone. Includes Exclusive Postcard of the band recording ‘Lark Descending’ (1 in 5 signed by Mathias Kom), shrink-wrapped. 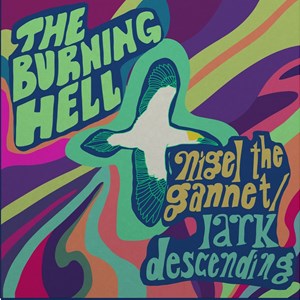