Miles Ahead is a 2015 American biographical-drama film directed by Don Cheadle in his feature directorial debut, which Cheadle co-wrote with Steven Baigelman, Stephen J. Rivele, and Christopher Wilkinson, which interprets the life and compositions of Miles Davis. The film stars Cheadle, Emayatzy Corinealdi, and Ewan McGregor, and closed the New York Film Festival on October 11, 2015. The film takes its title from Davis’s 1957 album. Cheadle took a free-form approach to the film’s narrative. Skipping around in time, it depicts Davis’ attempts to get his career back on track following a period of inactivity and drug addiction in the 1970s, fictional adventures with a journalist (played by McGregor) who wants to profile him, and his troubled marriage to a former dancer (Corinealdi). The film’s score covers, in non-linear fashion, Davis’ actual recordings throughout his career, beginning with Agharta (1975) before jumping back and forth in scenes featuring Kind of Blue (1959), Someday My Prince Will Come (1961), Bitches Brew (1970), and We Want Miles (1981), among others.

For sale here is the original motion picture soundtrack of the film, released on April 1, 2016. It  features music by Miles Davis, Robert Glasper, and Taylor Eigsti, with dialogue tracks by Don Cheadle, Ewan McGregor, and Phil Schaap. Consisting of 24 tracks, the music ranges through instrumental jazz, jazz-funk, modal music, hard bop and fusion. There are four new compositions written/co-written by Glasper. The album stands as a double portrait of Davis, since the album consists of both contemporary compositions referencing him plus his original compositions.

5.Dialogue: “Listen, you talk too goddam much”

8.Dialogue: “If you gonna tell a story”

11.Dialogue: “Sometimes you have these thoughts”

16.Dialogue: “Be musical about this shit”

18.Dialogue: “Yâ??all listening to them” 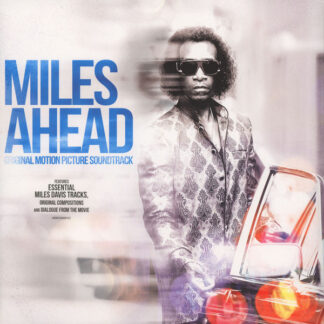