The Pixies are an American alternative rock band formed in 1986 in Boston, Massachusetts. Until 2013, the band comprised Black Francis (vocals, rhythm guitar, songwriter), Joey Santiago (lead guitar), Kim Deal (bass, backing vocals) and David Lovering (drums). The band disbanded acrimoniously in 1993 but reunited in 2004. After Deal left in 2013, the Pixies hired Kim Shattuck as a touring bassist; she was replaced the same year by Paz Lenchantin, who became a permanent member in 2016.

The Pixies are associated with the 1990s alternative rock boom, and draw on elements including punk rock and surf rock. Their music is known for its dynamic “loud-quiet-loud” shifts and song structures. Francis is the Pixies’ primary songwriter; his often surreal lyrics cover offbeat subjects such as extraterrestrials, incest, and biblical violence. They achieved modest popularity in the US but were more successful in Europe. Their jarring pop sound influenced acts such as Nirvana, Radiohead, the Smashing Pumpkins, and Weezer. Their popularity grew in the years after their break-up, leading to a 2004 reunion and sold-out world tours.

Black Francis / Frank Black has released several albums under his own name.

Please note that this concert was Live at Hollywood Palladium, Hollywood, December 21, but the year was 1991, not 1992. 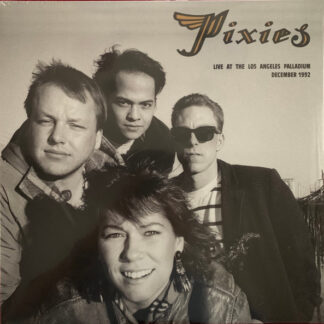