The Lovely Eggs are an underground punk rock duo from Lancaster, northern England. They have a fierce punk rock ethos that music should have no rules. For Holly and David being in a band is a way of life. True to this, they live the way they play. Fiercely, constantly in search of the good times. With observational and often surreal lyrics about life, The Lovely Eggs have a powerful stripped-down sound: one vintage guitar amp, one Big Muff distortion pedal, a guitar and a drum kit.
With releases in the UK, Europe, USA and Japan, they have played hundreds of gigs around the UK, USA and Europe supporting the likes of Half Japanese, Shonen Knife, The Slits, Young Marble Giants, The Television Personalities and Art Brut, as well as a two-month tour of America and a string of dates at SXSW in Austin, Texas. Holly Ross was previously in the band Angelica.

This is the first release of I am moron, on neon yellow vinyl + download. Both sides conclude with a locked groove.
It was also re-released a year later for Record Store Day 2020 August Drop 1 in a special mirrored sleeve, invting the viewer to ‘be a moron’ . Only 1000 neon pink vinyl LPs were pressed for RSD, but at the time of writing (04/10/2021) both versions are available from us. 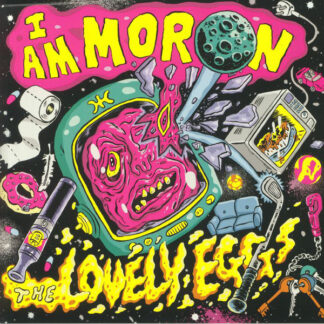