Clara Rockmore was born Clara Reisenberg on 9 March 1911 in Vilnius, now Lithuania, then in the Russan empire. Early in her childhood she emerged as a violin prodigy. At the age of four, she became the youngest ever student at the Saint Petersburg Conservatory, where she studied under the prominent violinist Leopold Auer. After the October Revolution the family moved back to Vilnius, and then to Warsaw, before obtaining visas and leaving for the United States in 1921.

In America, Rockmore enrolled at the Curtis Institute of Music. As a teenager, tendonitis affected her bow arm, attributed to childhood malnutrition, and resulted in her giving up the violin. However, after meeting fellow immigrant Léon Theremin and being introduced to his electronic instrument bearing his name, she became its most prominent player. She performed widely and helped Theremin to refine his instrument. Many classical and film composers have used the theremin to great effect and one of its most popular appearances was in the Beach Boys’ hit, Good Vibrations. In film scores, Bernard Herrmann used it in ‘The Day the Earth Stood Still’ and Miklós Rózsa in ‘Spellbound’, to name but two.

This album was produced by synthesizer pioneer Robert Moog with Shirleigh Moog. 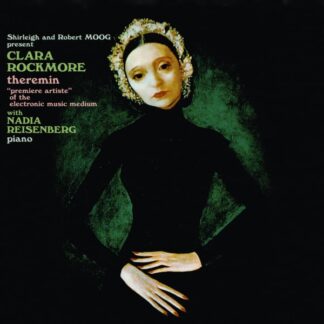