The Queen is Dead

Warner issued multi-disc deluxe editions of  The Smiths’ 1986 album The Queen Is Dead on vinyl, CD and DVD in October 2017. The album is generally considered to be the band’s best work and features the classic There Is A Light That Never Goes Out.
The formats are:
1) 5LP box set including the remastered album, demos, alternates and B-sides and a live set from Boston, 5/8/86
2) 3CD+DVD deluxe edition, which includes the remastered album, a bonus CD of demos, alternates and B-sides and a live set from Boston, 5/8/86, a DVD featuring  the 2017 master of the album in 96kHz / 24-bit PCM stereo. This disc also includes The Queen Is Dead – A Film By Derek Jarman.
3) 2CD with the remastered album and the aforementioned bonus CD of demos etc.

WE HAVE STOCK but the first two formats are OUT OF PRINT AT WARNER.

Please note that we can post this at the same cost as an LP, so that’s why LP is the designated shipping class. 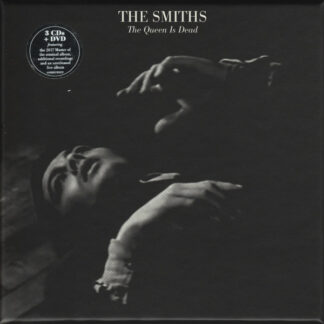