“To mark Record Store Day in 2022 and the 40th Anniversary of its original release, Universal Music Catalogue are reissuing Thin Lizzy singer Phil Lynott’s 1982 solo album ‘The Philip Lynott Album’ on LP for the very first time, on limited edition white vinyl. It has been newly mastered for 180 gm vinyl at Abbey Road Studios, and is housed in an eye-catching black and gold sleeve reproducing the original artwork. Originally released in September 1982, ‘The Philip Lynott Album’ was the singer’s second solo venture, following on from ‘Solo In Soho’ two years earlier. It was recorded and released between Thin Lizzy’s eleventh and twelfth studio albums ‘Renegade’ (1981) and ‘Thunder And Lightning’ (1983). This 40th anniversary vinyl release adds the 1981 remix of ‘Yellow Pearl’; a No. 14 hit in January ’82, it was co-written with Midge Ure of Ultravox and used as the theme music for Top of the Pops between 1981 and 1986, but omitted from the original UK LP and cassette versions. Two further singles – ‘Together’ and ‘Old Town’ – were also taken from the album. In addition to Midge, the line-up on ‘The Philip Lynott Album’ includes his Ultravox band mate Rusty Egan, plus Thin Lizzy members Scott Gorham, Snowy White, Gary Moore and Brian Downey. Two of the tracks – ‘Old Town’ and ‘Ode To Liberty (The Protest Song)’ – were co-written by Phil and Jimmy Bain, bass player with Rock bands Dio and Rainbow (and perhaps more surprisingly, on Kate Bush’s 1981 single ‘Sat In Your Lap’). Mark Knopfler adds guitar to ‘King’s Call’ and Huey Lewis plays harmonica on ‘Tattoo (Giving It All Up For Love)’ and ‘Ode To A Black Man’. Phil Lynott was a founding member, singer and bass player with Thin Lizzy, who had fifteen UK Top 40 singles and fourteen Top 40 albums between 1973 and 2020. He had a further four Top 40 solo singles, including the 1985 No. 5 ‘Out In The Fields’, a collaboration with guitarist Gary Moore. He was also the singer on Moore’s 1979 No. 8 single ‘Parisienne Walkways’. Phil featured on the best-selling 1978 concept album ‘Jeff Wayne’s Musical Version of War of the Worlds’, playing (and singing) the role of Parson Nathaniel. The following year Phil, along with Thin Lizzy’s Brian Downey and Scott Gorham, collaborated with the Sex Pistols’ Paul Cook and Steve Jones, releasing the No. 28 Christmas single ‘A Merry Jingle’ under the name The Greedies. Phil died in Januray 1986, and is commemorated by a bronze statue, erected in 2005 on Harry Street in his home town of Dublin” 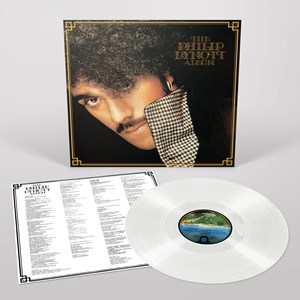 You're viewing: The Philip Lynott Album £22.99
Add to basket