The Dark Side of the Moon

The Dark Side Of The Moon (DSOTM for short) is the eighth studio LP to be released by Pink Floyd. It was recorded at Abbey Road Studios in London, England and released in 1973. It stands as one of the most successful commercial recordings of all time, and has been released in many countries. In the U.S., the album has spent more time on the Billboard 200 album chart than any other release in modern history. Early releases included two posters and two color stickers inside the gatefold sleeve, all designed by the U.K. graphics and design company Hipgnosis. The most sought-after and valuable version of is the original U.K. Harvest issue, identifiable with a solid blue triangle on the labels instead of the shaded triangle used on most other versions. On September 11, 2020 the MR first reached the threshold of 1000 different versions and is currently hovering around that number, making it one of the most populated MRs in the entire database. Most of the vinyl versions were issued with gatefold sleeves. However there are a number of versions with significant differences in packaging and design, such as one from the Philippines which has the artist’s name and LP title printed in large text on a non-gatefold sleeve. In South Korea, another non-gatefold sleeve version but this time with a glossy cover was issued and has some tracks omitted for political or other reasons! New and previously undocumented versions of DSOTM get added to the database frequently making it one of the most interesting titles to focus on for ‘deep collectors’.

The current release is on 180g vinyl and simulates the original packaging – in a gatefold sleeve with two rectangular Pink Floyd stickers and two posters, one of the band and another of the pyramids. 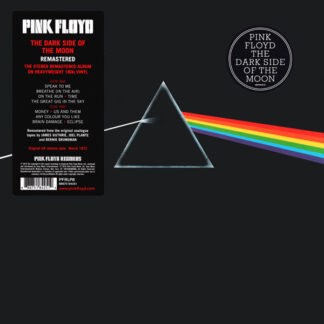