Death in Vegas is an electronic rock band from the United Kingdom, a brainchild of Richard Fearless (Richard Maguire).  Influenced by a wide range of musical genres including psychedelic rock, electronic, krautrock, dub and industrial, the band’s sound is constantly changing, moving between live rock sounds and electronic. The band was formed in London in 1994 by Fearless and Steve Hellier and signed to Concrete Records under the name of “Dead Elvis”. Objections from the Elvis Presley estate forced them to change their name, and Dead Elvis became the title of their first album instead.

The band’s second album, The Contino Sessions (1999), marked a slight change in direction with more attention to live instrumentation than their first and the inclusion of guest vocalists (including Dot Allison, Bobby Gillespie, Iggy Pop, and Jim Reid). Although predominantly rock-influenced, the album still retained some electronic elements, in particular the opening track, “Dirge”, with its drum machine-based rhythm track. “Dirge” was featured on a Levi’s jeans commercial, as well as the second instalment of The Blair Witch Project, and was used in the trailer for the 2006 film The Black Dahlia. The song was also used in the trailer for the 2013 film Cheap Thrills and used in the 2002 film 28 Days Later, at the end of the 2009 remake of The Last House on the Left, near the end of the Being Human episode “The Longest Day”, and in the second episode of season two of Misfits. Along with “Aisha” (with vocals from Iggy Pop), “Dirge” helped the band gain more recognition, culminating in a Mercury Music Prize nomination in 2000. “Dirge” was the subject of a lawsuit by the band Five or Six, as it borrowed extensively from their song “Another Reason”. The matter was settled with Five or Six receiving a writing credit. “Aisha” was a top 10 hit in the UK and also featured in the PlayStation 2 title Gran Turismo 3: A-Spec. 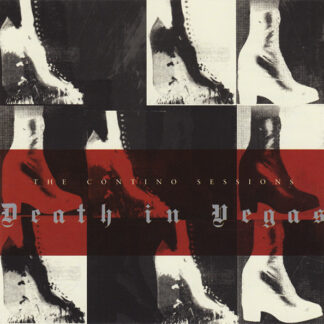 You're viewing: The Contino Sessions £28.99
Add to basket