Menswear were a much-hyped mid-’90s Britpop group founded in 1994 in Camden Town, London and disbanded in 1998. They infamously received a great deal of press and record label interest before recording a single note. The original members were Johnny Dean – vocals, backing vocals, percussion; Simon White – electric guitar, backing vocals; Chris Gentry – electric and acoustic guitars; Stuart Black – bass, acoustic guitar and Matt Everitt – drums, percussion.
Their debut album ‘Nuisance was released in 1995. The album yielded five singles,  all with multiple b-sides. After one non-album single, ‘We Love You’, was issued in 1996, the mostly-forgotten second album, ‘¡Hay Tiempo!’, was released only in Japan in 1998.
In 2013, Johnny Dean reconvened the group with all new members and they released the single ‘Crash ’14’, a re-recording of an earlier song. They continue to tour.

This is the 25th Anniversary release of their 1995 debut album. 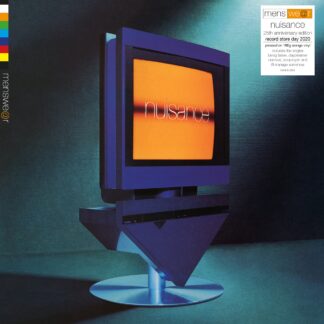