Nighthawks at the diner

SKU: 8714092756715 Catalogue number: 7567-1 Categories: Blues, Jazz, Rock, Singer/Songwriter Tags: Tom, Waits
Thomas Alan Waits, known as Tom Waits, was born on December 7th. 1949, in Pomona, California. His first album, “Closing Time”, was released in 1973. A contemporary artist, Waits is mostly known for his lyrical and poetical songwriting and raspy gravelly voice.
His own inspiration is rooted in early blues and beat poetry with influences like Howlin’ Wolf and Jack Kerouac. Apart from music, Waits also has a strong presence in movies. He has appeared in works by Francis Ford Coppola, Jim Jarmusch, Terry Gilliam, and Robert Altman.

This album was first issued in 1975. This edition from 2018 was issued in a variety of colours, but there are no labels on each sleeve say which are which.
‘Newly remastered with Waits/Brennan’ 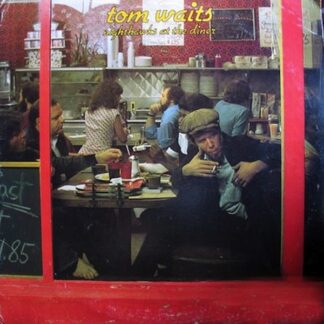 You're viewing: Nighthawks at the diner £21.99
Add to basket