The Golden Striker is an album by bassist Ron Carter recorded in 2002 and originally released on the Japanese Somethin’ Else label with a US release on Blue Note Records. This live version was recorded on 30/10/16 at the Theaterstübchen in Kassel, Germany.

In JazzTimes, Thomas Conrad stated “The Golden Striker is chamber jazz of a high order. … the musicianship in this trio is so refined and the sharing of ideas so selfless that the transitions from the predetermined to the collectively discovered to the individual statement are seamless”. On Jazz Review, Don Williamson wrote “The Golden Striker is yet another of Ron Carter’s recordings of musical gems that glow, rather than glitter, as he develops memorable tunes, nonetheless deceptively difficult to achieve in the hands of less accomplished musicians, that listeners would want to hear repeatedly because of their beauty and accessibility”.

This 2LP audiophile quality release for Record Store Day 2021 is signed by Ron Carter. It is in a hand-numbered edition of 1999 copies and includes bonus tracks not available on the CD.  The other members of Carter’s trio are Donald Vega (piano) and Russell Malone (guitar). 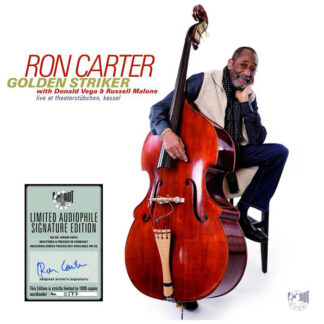