Gold Dust Live At The Royalty

Highlights from Sandy Denny’s final concert makes it’s debut on vinyl. This special RSD release would commemorate what would have been Sandys 75th birthday year and also mark the 43rd anniversary of her death which falls on or around Record Store Day itself (21st April.) This career spanning set showcases the quality of Sandy’s songwriting throughout her career and includes her signature composition ‘Who Knows Where The Time Goes?’ which is especially poignant as this is the last time she would sing it. Sandy Denny’s final concert recorded at the Royalty Theatre, London, England on 27 November 1977. Jerry Donahue, Simon Nicol and Chris Leslie were not present at the concert and added their parts later. This release principally differs from the 1998 CD issue by reinstating the original audience responses and Sandy’s spoken introductions to the songs. 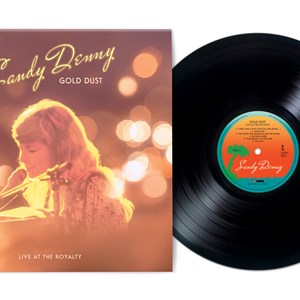 You're viewing: Gold Dust Live At The Royalty £20.99
Add to basket