Formed in 1997 after the demise of Pure Morning, debut single ‘IPC Subeditors Dictate Our Youth’ made BBC Radio 1 DJ John Peel’s end-of-year Festive Fifty. Debut album ‘Internal Wrangler’ contained the track ‘Second Line’ which was used in a Levi’s jeans TV ad, whilst ‘Walking With Thee’ from the sophomore album gained the band an appearance on The David Letterman Show in the US. ‘Come Into Our Room’, a track from the same album was featured in episodes of both US shows CSI and The O.C. and ‘If You Could Read Your Mind’ from fourth album ‘Visitations’ appeared in the 2007 film ‘Hallam Foe’. Clinic usually appear live wearing medical scrubs, with their faces hidden by surgical masks.
Their eleventh album for “Calibrated evenings in single file”,  as it says on the hype sticker. This one is on limited edition Curacao Blue vinyl and includes a download code. 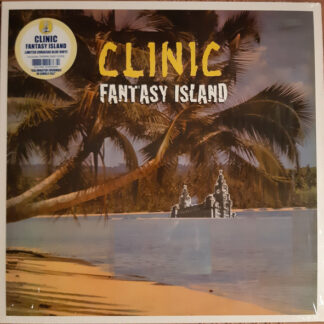