Call Me Up / Let’s funk tonight

Blue Feather are a Dutch soul funk band. Their story begins in 1976 when two brothers, Ed and Ron Brouwer, formed a group with musician friends. After playing in small clubs, where they performed a repertoire of covers and their own written songs, in 1980 they decided to start over with a few new members. From that moment on, they started with their own written songs and developed a new sound. The result was a mix of Latin, funk and pop with arrangements for several voices. This 12″ release for RSD21 is in an edition of 750 copies numbered copies on translucent blue vinyl. 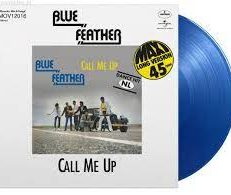